Nigel Wearne saunters after dark in the music of the night, blending blues, folk and Americana-noir. Hailing from Gunditjmara country in South-West Victoria, he’s a guitarist and multi-instrumentalist with diverse influence from Nick Cave, Tom Waits and Gillian Welch. A deep thinker and truth speaker with a penchant for all things peculiar, he sings of human frailty, grace and the cosmos; songwriting that cuts to the bone.

Nigel has toured Australia, New Zealand and Canada and he’s performed at a long list of music festivals, including the Port Fairy Folk Festival, Adelaide Guitar Festival and Queenscliff Music Festival. His sophomore album, Black Crow  garnered wide critical acclaim including a 4-STAR review in Rolling Stone, a nomination for Best Country Album at the Music Victoria Awards and it debuted at #1 on the AMRAP Charts.

His latest single, ‘Black Behind The Blue’ is a rollicking, Americana-noir-blues shuffle with a back-street after dark New Orleans swagger. An illicit dream of forbidden love; elusive and mysterious; blinding and eternal – lost in the shadows of your subconscious. The new beginnings of a dedicated and shape-shifting artist.

Jen Lush will open the show in duo form with Sam Cagney. 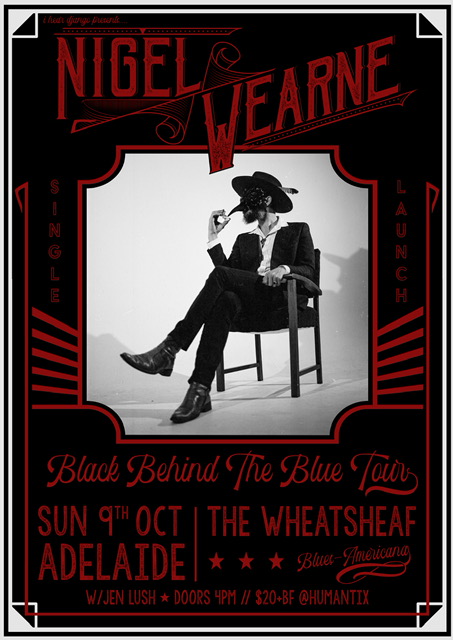 LISA AND JEN WILL BRING THEIR EVOCATIVE, DYNAMIC AND HEARTFELT ORIGINAL MUSIC TO THREE GORGEOUS VENUES CELEBRATING THE  SHARING OF SONGS ACROSS BORDERS ONCE AGAIN.

With a voice described as both ferocious and sweet, and a percussive guitar style,  Lisa Richards writes songs of longing, loss, love and hope. Songs steeped in  musical expressiveness and lyrical succinctness, borrowing from the traditions of  folk, blues and jazz with her feet firmly planted in her own musical corner of the  world. Driven by a desire to be seen, to understand the world and the human  condition and to share what she sees with others.

Jen Lush and her extraordinary band – James Brown, Sam Cagney, Paul Angas and  Mark Seddon released their brand new album ‘Let Loose The Beating Birds’ in 2021  that takes you through dynamic and evocative landscapes that explores motherhood  and the suburban life, whilst examining the broader environmental and political

landscape of our current times. From tender folk songs to rolling, fierce rock infused  soundscapes that flicker and twist, storytelling is at the centre.

Adelaide singer-songwriter Jen Lush and her extraordinary band return to the Wheaty with their dynamic, intimate and adventurous new music. “an enchanting, otherworldly experience for listeners.” Beat Magazine
Aaron Thomas is a Tasmanian born, Sydney bred songwriter who writes a mix of old style folk/country with dark, alternative bends and melodies that wrap their knuckles around love, loss and despair.
Aaron Thomas and his band have recently recorded a new album due for release in 2022.

Nick Vulture is launching his first full length solo album Dust Off The Sails, with the amazing Jen Lush!

After 18 years blasting out the SA garage punk scene with The Molting Vultures, Nick Vulture has taken a 180 degree turn with his solo acoustic songs. Since returning from Melbourne in 2020, Nick has been playing regularly in Adelaide, engaging the audiences in his deeply personal and very raw storytelling. At the launch of Dust Off The Sails, Nick will be joined by the incredible talent of Jen Lush and her band. Jen released her latest album Let Loose The Beating Birds to great reviews in 2021, showcasing her intelligent prose and the beautiful layers to her music. This is a show that just can not be missed! 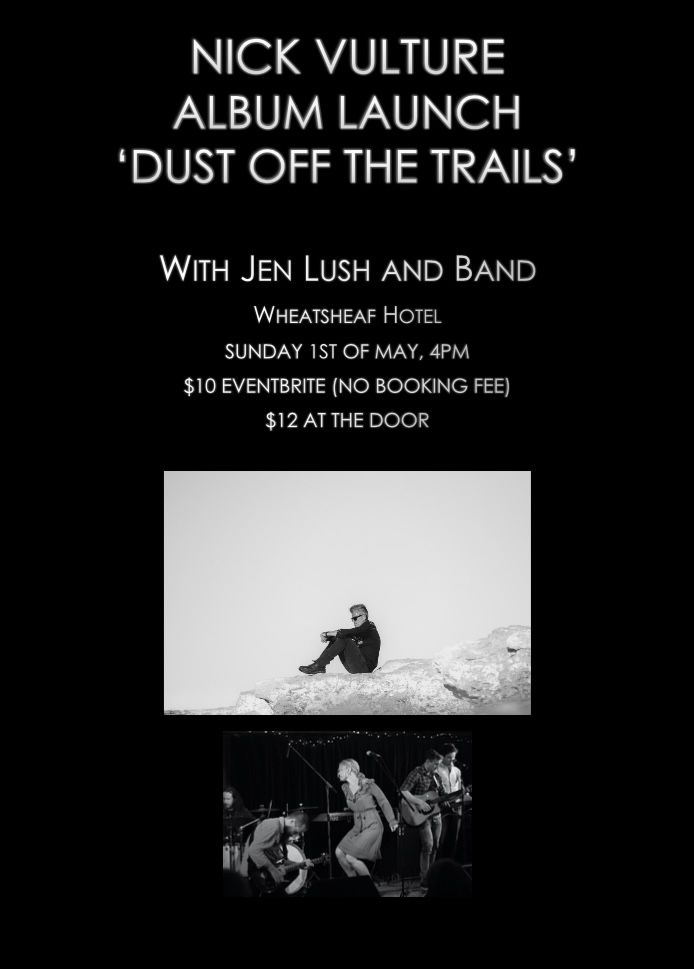 We’re playing this special show, alongside the incredible Kylie Kain and raising funds for the Mid-North Climate Connect group who do all kinds of great work. It’s from 4pm at the Rising Sun hotel in Auburn, and we’d love to see your faces!
About this event
Jen Lush and her extraordinary band (James Brown, Sam Cagney, Paul Angas and Mark Seddon) perform songs from their brand new album ‘Let Loose The Beating Birds.’ From tender folk songs to rolling, fierce rock infused soundscapes that flicker and twist, storytelling is at the centre.
“combining the world of poetry with experimental folk-rock soundscapes to devise what is an enchanting, otherworldly experience for listeners.”
Ashlee Simpson, Beat Magazine
Kylie Kain’s first professional ‘gig’ was at 17 when she toured South Australia, doing musical seminars in rural schools. She has taught kids in remote communities, people in aged-care facilities & dementia wards, young mothers, new Australians, and people experiencing homelessness. 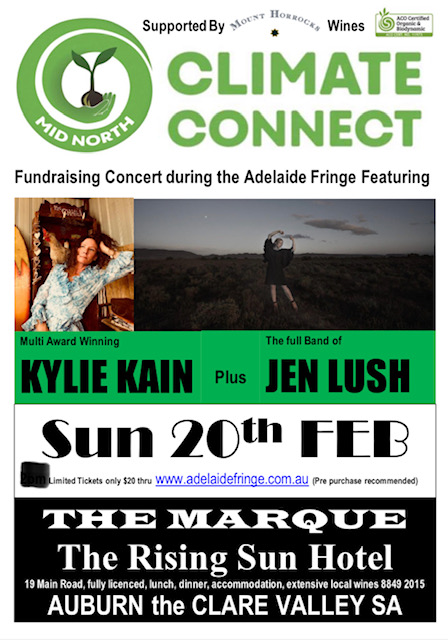 Some of South Australia’s best original solo musicians come from the south of Adelaide.  The Sunday afternoon and evening event of February 27th is set in the beautiful Arts Centre in Noarlunga and celebrates five of the most talented musicians in the region.  Coming together for the show will be Tilly Tjala Thomas, Loren Kate, Jen Lush, Nick Vulture and Steve Ashley!  The songs of each of these singer songriters come from a deeply personal place and are fimly grounded in the folk music styling of storytelling, poetry, observation and life experience.  Take your place at this event and celebrate the talent of the south in an acoustically and aesthetically beautiful venue! 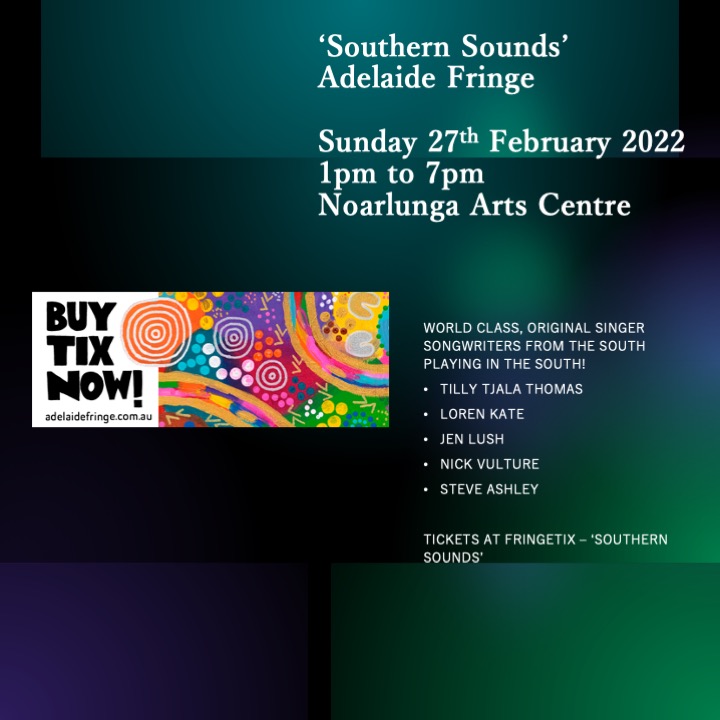 Fringe concert showcasing original singer-songwriters from the South of Adelaide

Lisa Richards returns to South Australia for a weekend of shows from Adelaide to Goolwa with Jen Lush and her stellar band.
Lisa Richards makes a rare visit to SA. Her songs of loss, love and hope, borrow from the traditions of folk, blues and jazz.
” a simple yet powerful songwriter” The Australian
Website: http://www.lisarichardsmusic.com
Jen Lush and her band will be highlighting her new album ‘Let Loose The Beating Birds,’ a collection of tender folk songs amid rolling, fierce rock soundscapes.
“An enchanting, otherworldly experience for listeners.” FORTE magazine
Website: http://www.jenlush.com 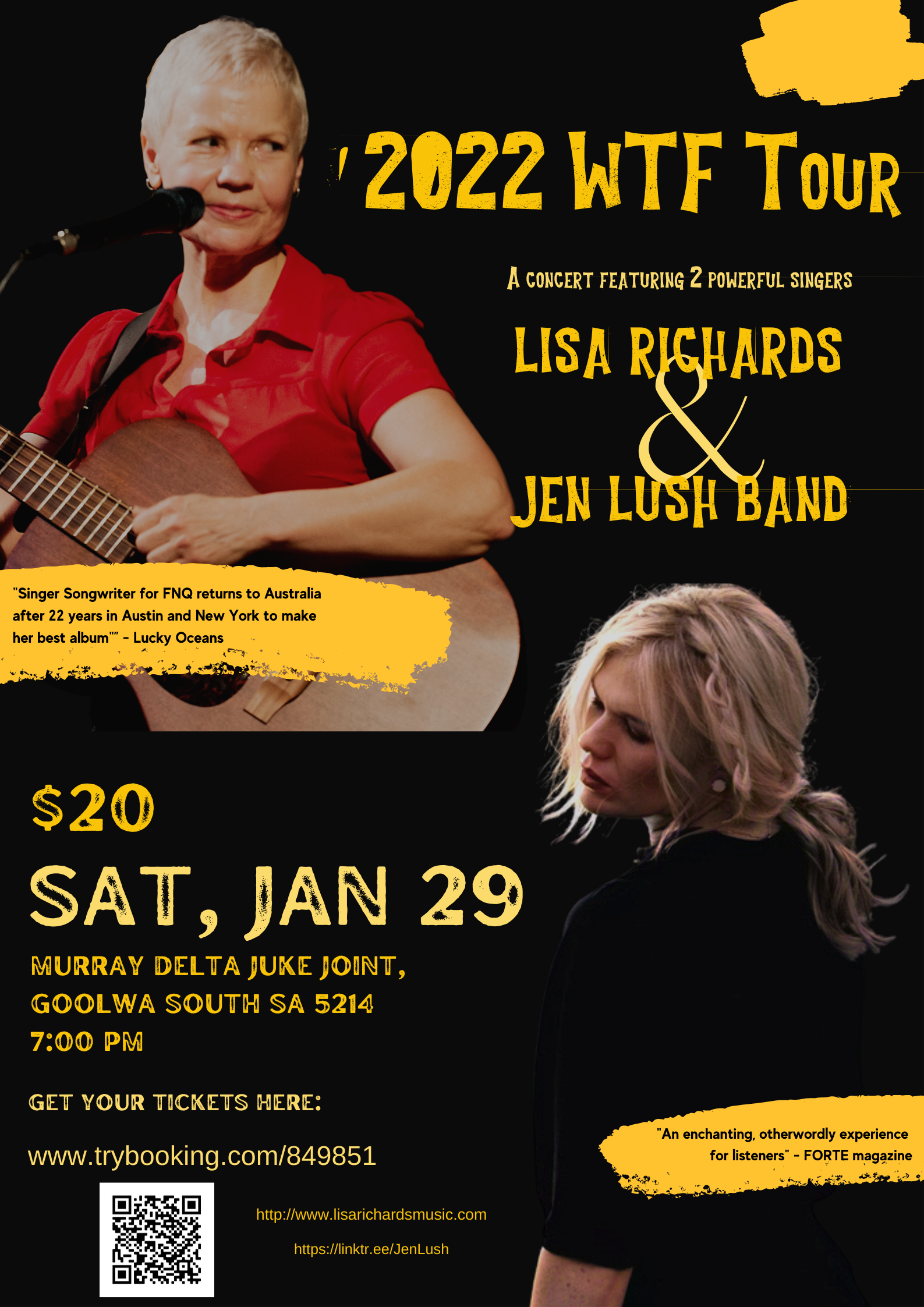 Lisa Richards returns to South Australia for a weekend of shows from Adelaide to Goolwa with Jen Lush and her stellar band.
Lisa Richards makes a rare visit to SA. Her songs of loss, love and hope, borrow from the traditions of folk, blues and jazz.
” a simple yet powerful songwriter” The Australian
Website: http://www.lisarichardsmusic.com
Jen Lush and her band will be highlighting her new album ‘Let Loose The Beating Birds,’ a collection of tender folk songs amid rolling, fierce rock soundscapes.
“An enchanting, otherworldly experience for listeners.” FORTE magazine
Website: http://www.jenlush.com 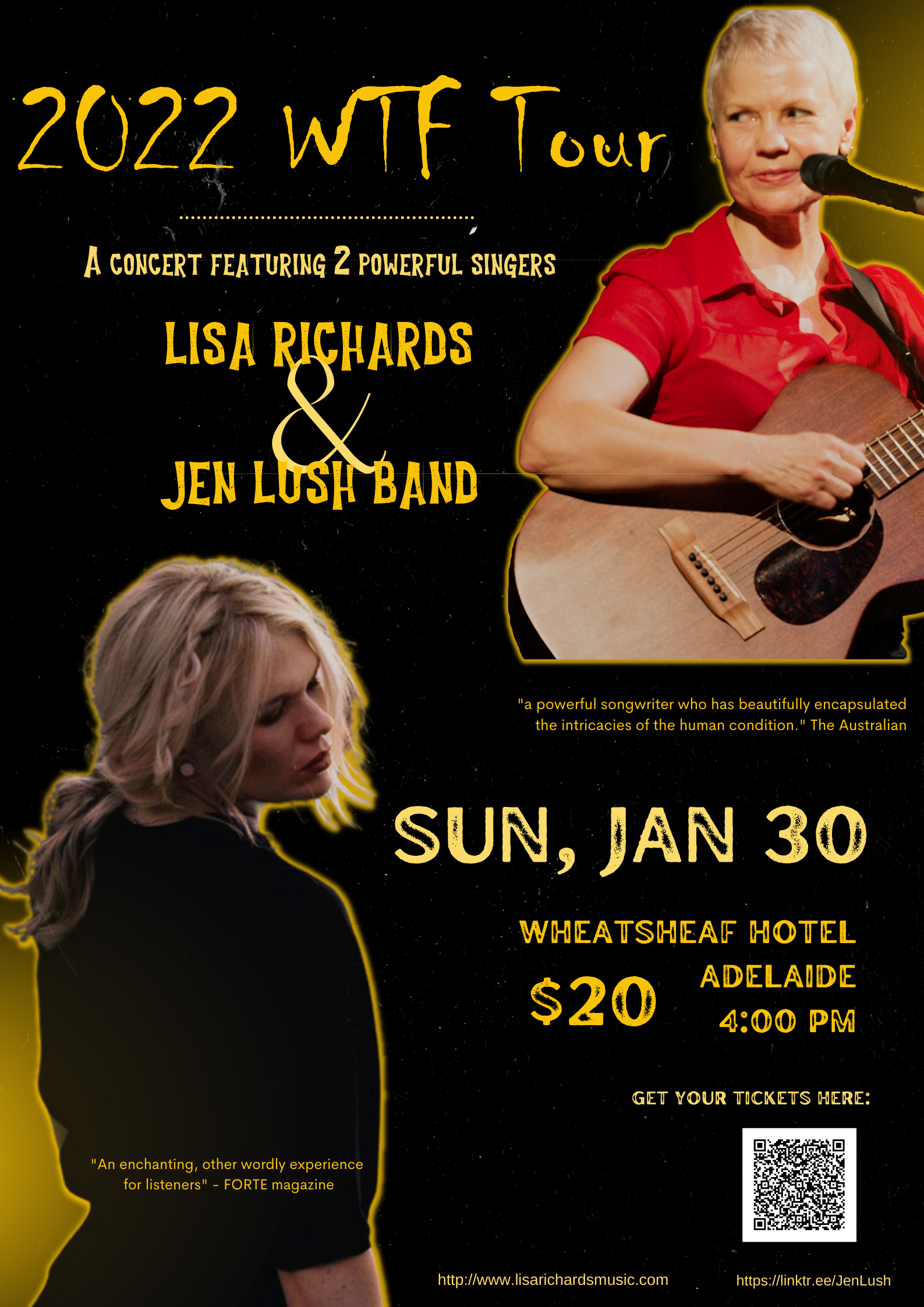 Jen Lush’s last show for 2021 – full band at the beautiful old Grace Emily Hotel on 26th November. Doors at 8pm, music kicks off at 8:30 with acoustic folk from the wonderful Nick Vulture, followed by a set of favourites from Let Loose The Beating Birds along with a few brand new songs to hammer on your heart, some wild moves and smooth sonic treasures. 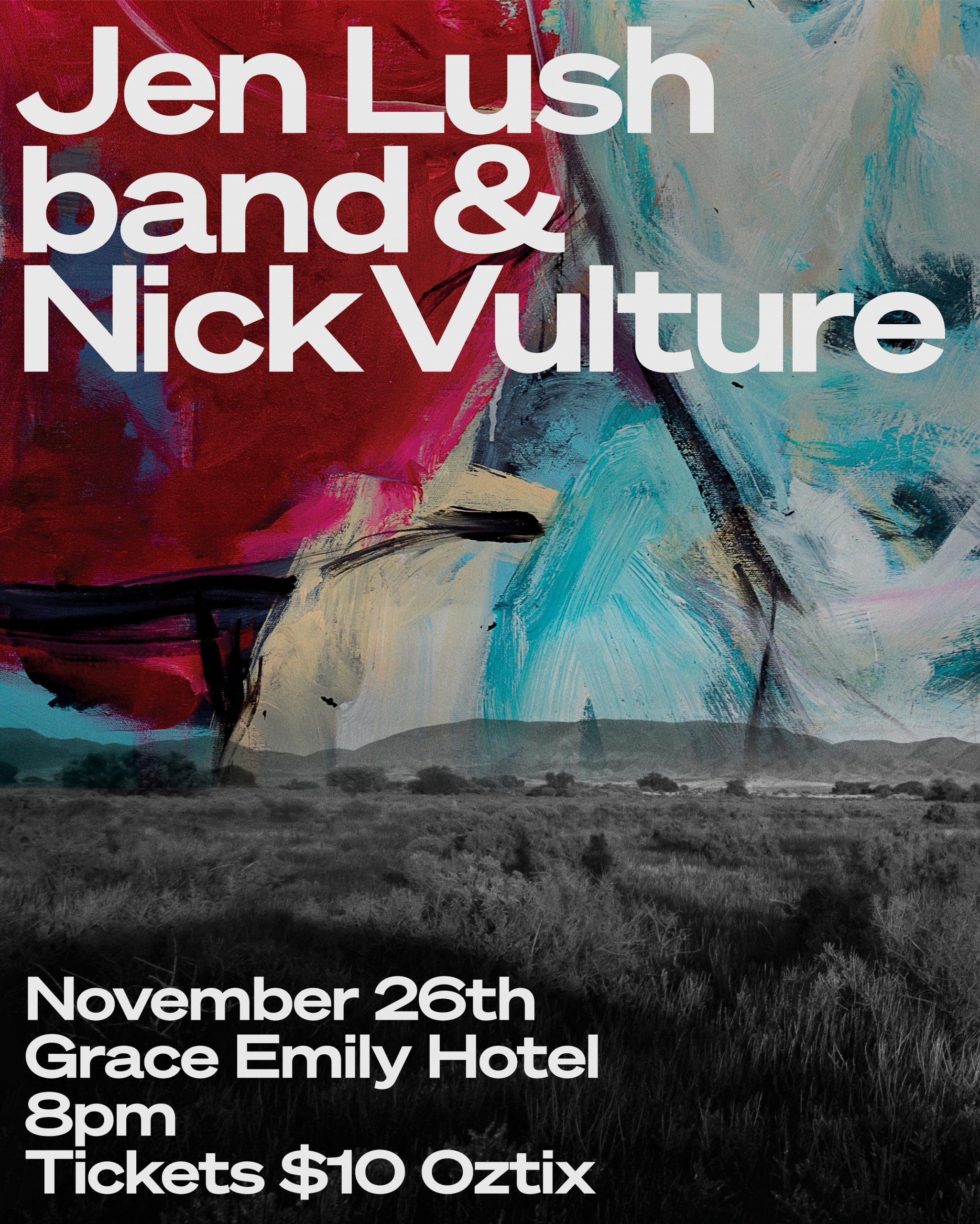 Jen Lush and her band launch their new album ‘Let Loose The Beating Birds,’ letting fly an evocative collection of songs that chronicle stories of motherhood and suburban life, whilst examining the broader environmental and political landscape of our current times. Songs flooded with potent imagery, shimmering vocals, intricate driving rhythmic soundscapes carved out with acoustic and electric guitars, bass, drums and keys. Joined by the incredible Naomi Keyte opening the night with Django Rowe.
Friday 20 August 2021 at 7:00 PM to 10:00 PM 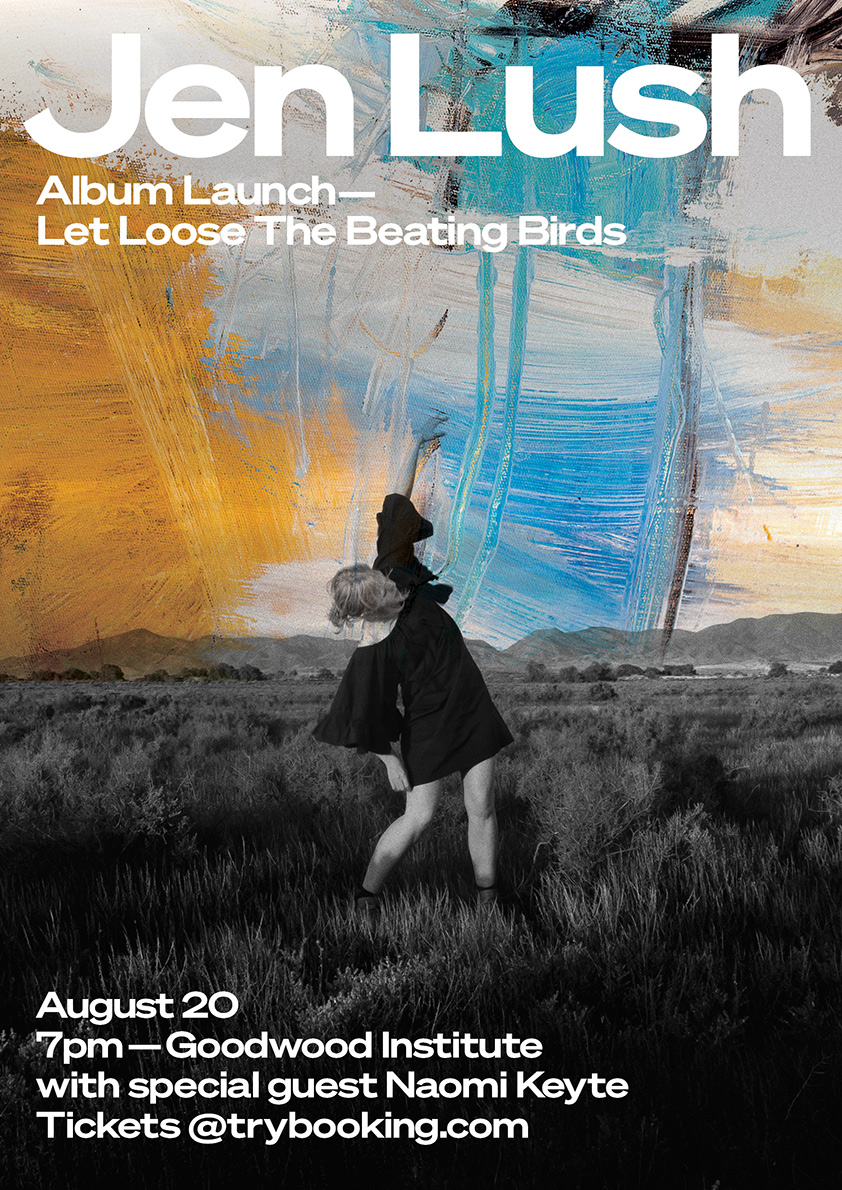 The Breakout Sessions - Jen Lush at The Mill : Collab 3 Ways - **Re-scheduled to October due to lockdown.**

This coming Umbrella Festicval we have something a little different coming up and would love to share it with you. You may already know that I’m a lover of collaboration with other artists, and in this unique opportunity, I’ll be diving into the wonders of the tease and tangle of ideas three ways – through my songwriting with little people, with poets and also with my band of fellow music makers. Join me solo and with my stellar band for three short and sweet sets that explore processes and performance, live poetry and maybe even get your hands dirty on an impromptu Collab in the room!

Set two – music of poetry: collaboration with poets, sharing some of the most recent commissioned piece – Music of Poetry for Denmark Festival of Voice, and The Night’s Insomnia, including live poetry readings. 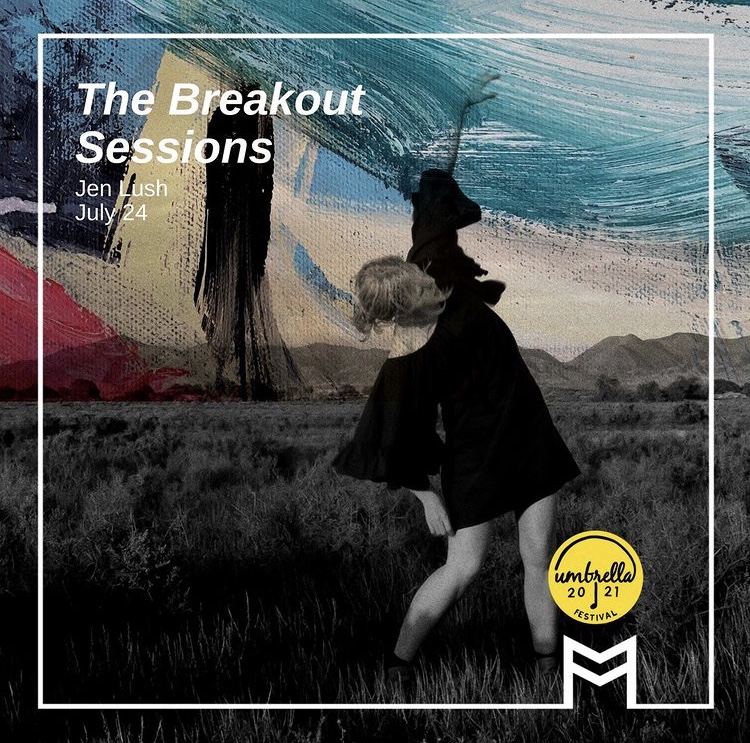 We’ll be launching Black Hammer this Saturday arvo 26th of June – 2:30 at The Three Brothers Arms (known affectionally as the Old Goats Head Baaa!) – such a cosy and wonderful place to be on a wintery afternoon by the open fire. We’ll be playing two sets of new songs and some older favourites, and may even play you a couple of those brand new poem-songs fresh from Denmark! 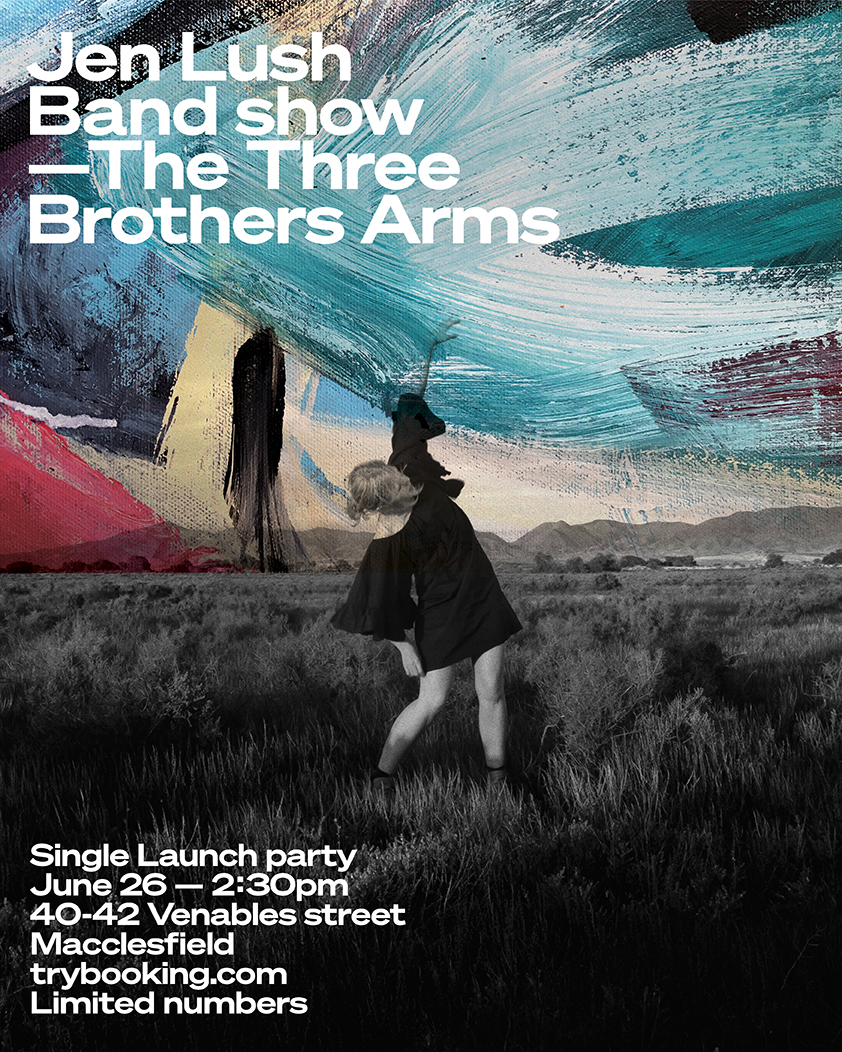 The Hills Are Live concert series will be hosting Jen Lush and her band, with the brilliant Stuart James Day opening the show. Family friendly and free entry, come and hang out at the warm and wondrous Balhannah Hotel for some Sunday music shenanigans. 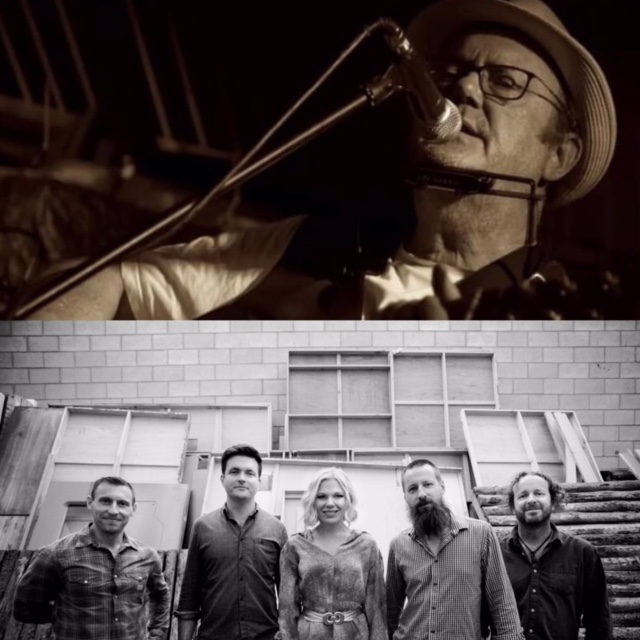 An autumny afternoon of indie folk sounds at the cosy, wonderful Three Brothers Arms. Family friendly, and all of the good food, wine and music you can soak up in just a few hours. Anna Smyrk brings her trio (violin and bass) to share her new EP full of glorious musical storytelling wrapped in folk-pop songs. Steve Lennox & The Keepers will be playing their stunning new album ‘In the Lighter Dark’ – stories inspired by Steve’s lighthouse-keeping family, wrapped in evocative, melodic songs. 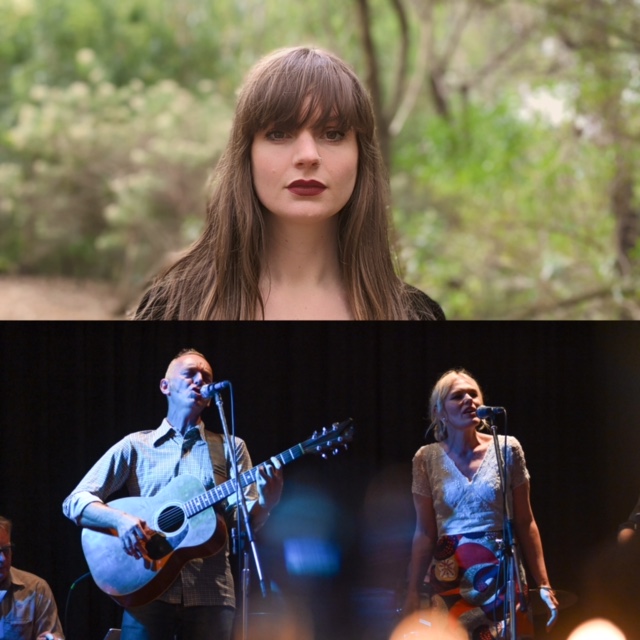 The Denmark Festival of Voice is not your average music festival. Held in the beautiful south coastal town of Denmark, Western Australia, the festival is one of only two dedicated vocal festivals in Australia 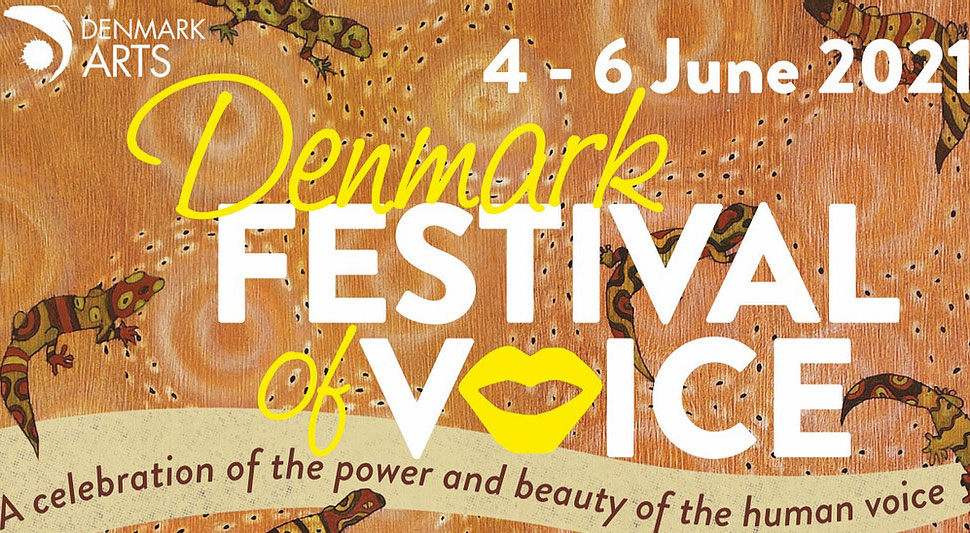 2020 was a year like no other and yet we completed recording a new album. Currently mixing, but also getting our live shows on. 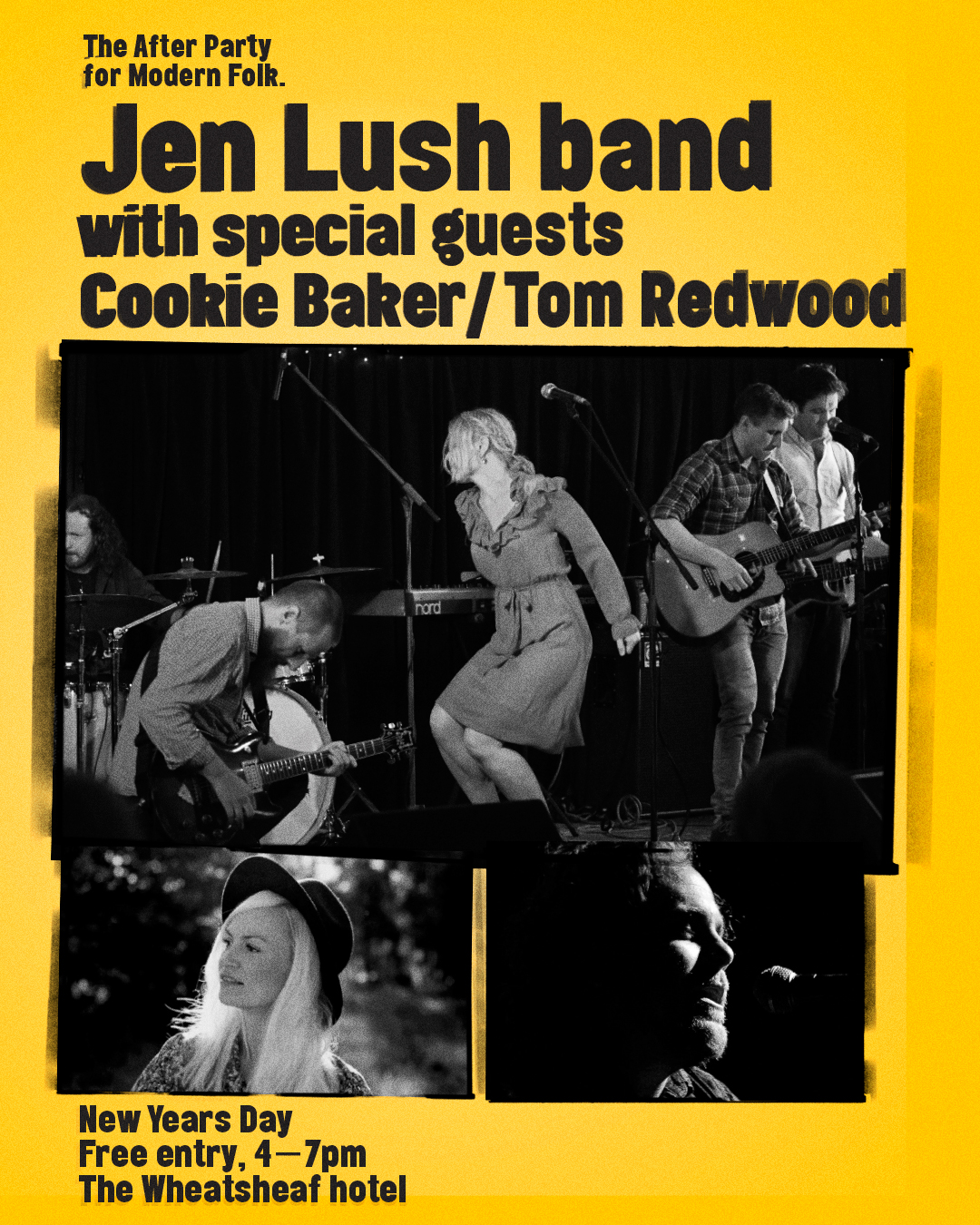 Had two brilliant shows in Tassie. Thanks for having us, we’ll be back! 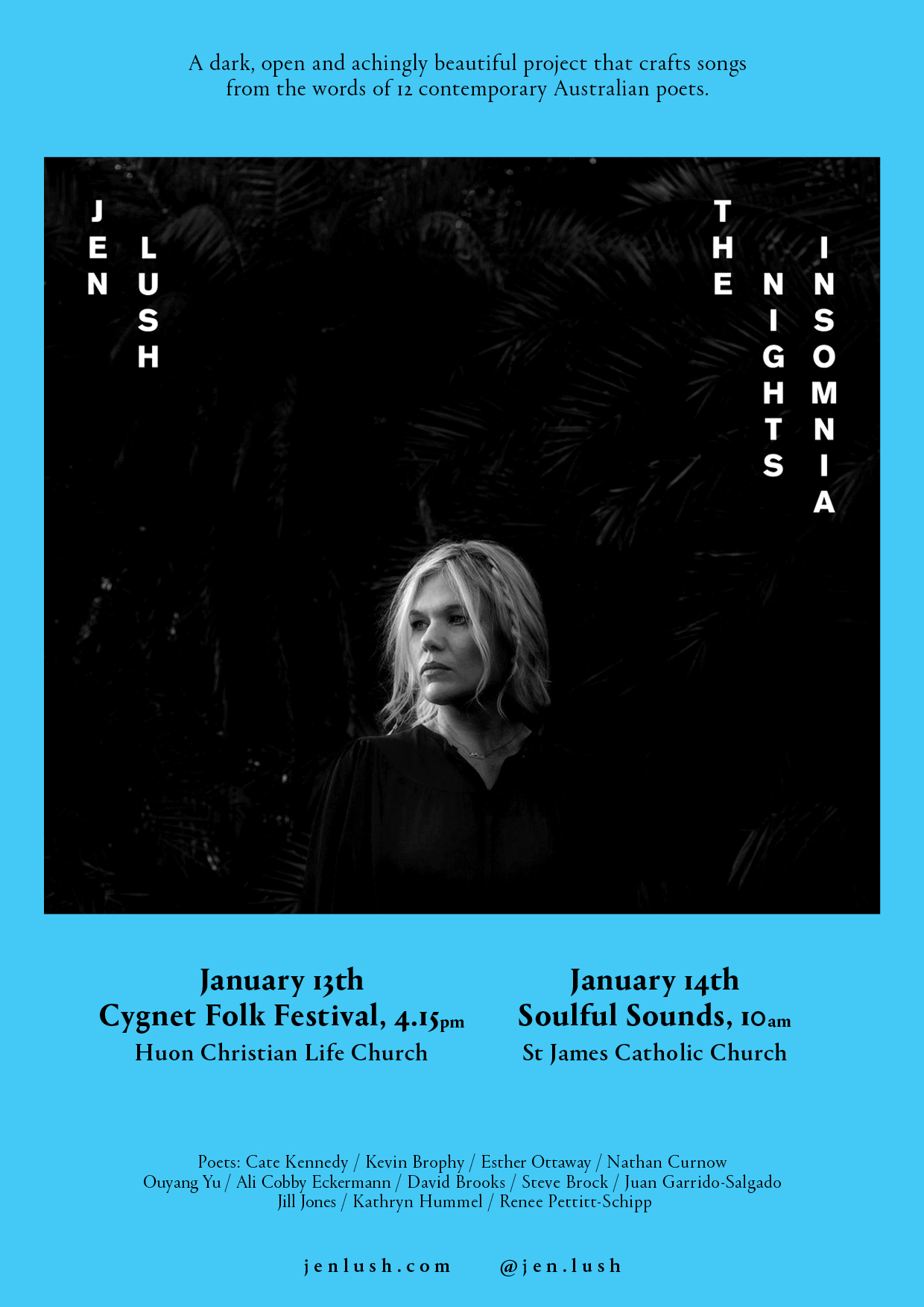 Sounds in the Suburbs 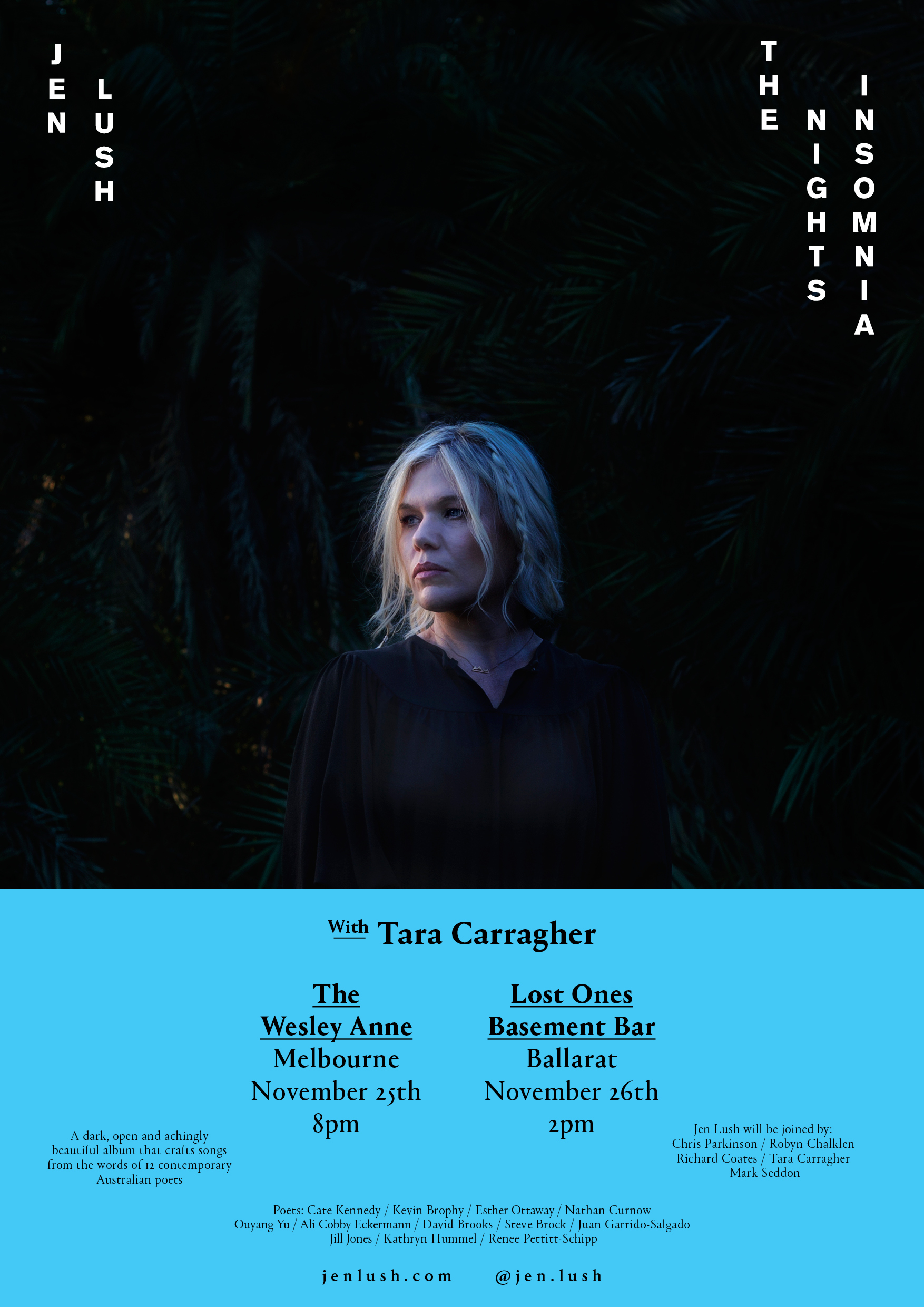 Book for The Wesley Anne 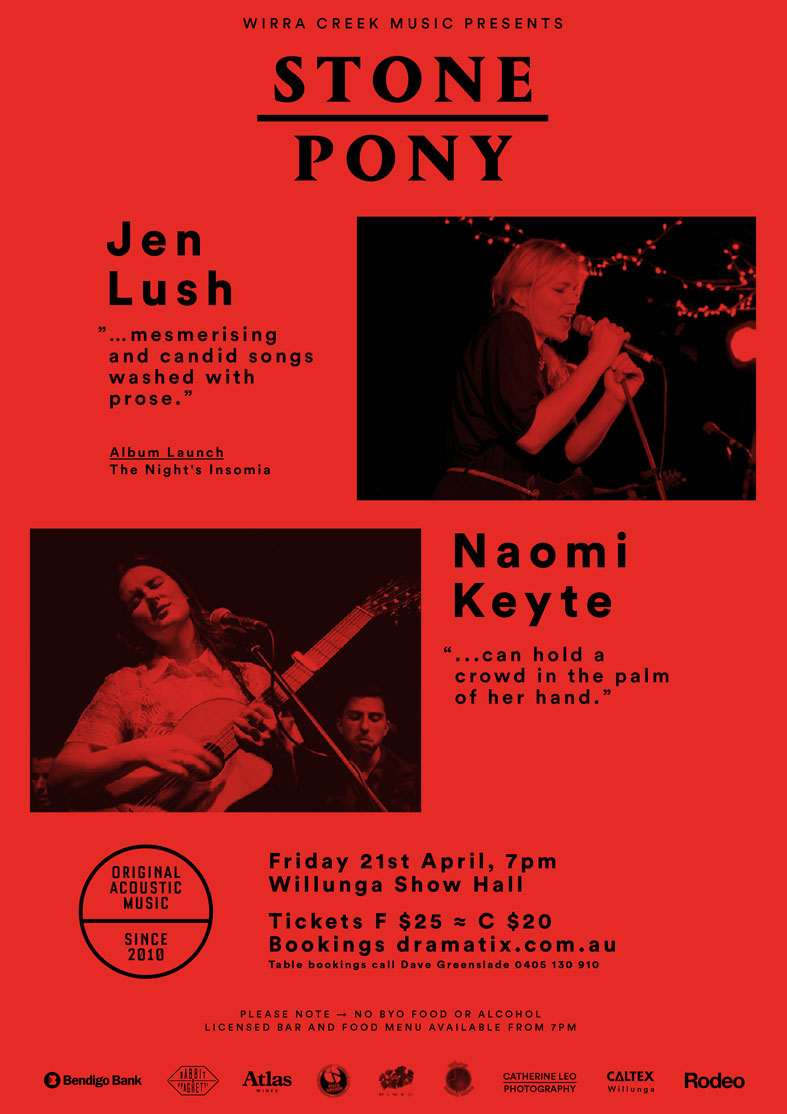 I’m really excited about embarking on another term of writing songs with the children at Eden Hills Kindergarten.  Already we have written 3 songs which work on the theme of sustainability: making a ball track from old plastic pipes; resource management – which bins do we use? And exploring executive function through song – Captain Blackbeard must go through his list of things to do before he goes out to play: What’s Next? And then there’s a song about a mouse at Kindy hiding under the piano! Will post songs up for listening soon.

Working with reception children at Eden Hills Primary School, exploring The Weather through dance, story and song. Drawing pictures of what they see outside through their windows and creating a group song based on their illustrations. Reenacting Mr McGee Goes To Sea and creating a movement symphony of wild weather has been a delightfully energetic start to the workshop series so far.

Recording 9 demo poem songs with Chris Parkinson (The Yearlings) at his studio My Sweet Mule. Gearing up to record the full album later in the year. Poems all come from contemporary Australian poets and are arresting, contemplative and speak deep into the heart. I can’t help but wonder what happens when sublime, carefully crafted poems are matched with evocative and finely honed, emotive music beautifully played? It could be a perfect marriage! Three songs left to compose for this album of 12 songs.

We are so excited to announce we will be playing at this year’s Fleurieu Folk Festival in Willunga, Oct 23-25 2015. It’s such a lovely music festival which in truth covers a diverse range of musical styles besides folk, including blues, roots, country, Americana and folk-rock. I saw Jordie Lane perform 2 years ago to a packed concert hall of rapt listeners, young emerging singer/songwriters, and brilliant local favourites like The Timbers, Courtney Robb and Andy and Marta. Plenty of interstate artists appear and a gorgeous festival atmosphere makes it one of the best music festivals in South Australia. 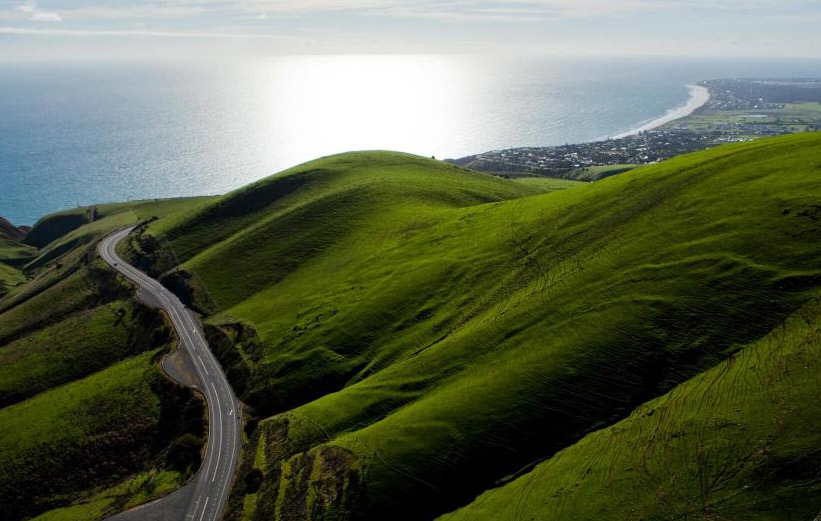 Big Star Records on Magill Road now stock Cat Dog Bird’s album Headfirst into the Riddle. Also can be found at Clarity Records and Title Store just off Rundle Street, Adelaide. Go out and get one, or any album you like and support little record stores!